Skip to content
Some men can’t handle a little competition! I know the bail bond industry is generally men-predominant, but there are a few women who have very strong personalities, they posses “thick skin” and we really don’t care what anyone else thinks about us! I say “WE” because I consider myself one of those women.

I’ve worked in a few bail bond companies where my “male counterparts” were very egotistic and self center; and don’t even get me started with some childish behavior as fighting between bail agents who work in the same office, not being able to flush the toilet (Really? How hard is doing that?), drinking on the job and “men-gossiping” Boy!!! Can men gossip?!!! Ooph! They are worse that the kindergarten girls at the playground!

Competition is good for everything that we do. I think it brings out the “excellence” of every individual. Come on! When being in a competition, we always want to win, right? I know I do! We have to prepare and do our best. Yet, we have to understand that sometimes we are going to win, and some other times we are going to lose.

I’ve encounter a bail agent from the competition who is playing “dirty” in the Van Nuys area. In California, the bail law states that a bail bondsman should charge a 10% as premium of the bail bond amount, it’s the law. But, Mr. David Manuel Matamoros Lic#1842701 is so desperate to make a buck and definitely can’t handle competition like a “man” should; that he is writing bail at 5% right outside the Van Nuys Jail. (In case you want to sue me Mr. Matamoros, I have the names and contact information of the people that you written bonds at 5%).

I’m so disappointed with the Department of Insurance because they seem to not care about this issue. Mr. Matamoros had his license revoked a few years back, and even when he had no license, he was still writing bail pretending to be a bail agent. I’m sure he is proud of  breaking the law and getting away with it.

So a few weeks ago, I told Mr. Matamoros that I was tired of his stupid games. I promised to him that the following day, I was going to stand in front of his office passing my business cards while only wearing my bikini. I’m sure Mr. Matamoros didn’t believe me at the time. So, on Monday August 15, 2011, I went to work at Van Nuys jail only wearing a Hot Pink bikini. I stood in front of Mr. Matamoros’s bail bond office and I passed 50 of “MY”business cards in one hour. Around 32 of those people became my friends on Facebook. My website got many hits and I learned that “less is more” literately, LOL!!! So wear less clothes, you’ll get more action. 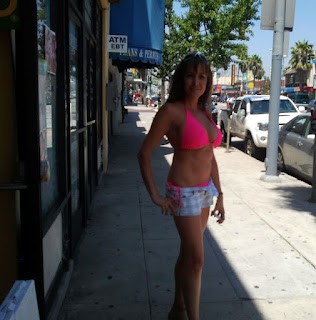 I made sure that Mr. Matamoros was aware that I was standing outside his office on that day. Of course Mr. Matamoros yelled at me many obscenities; but, he needs to see that he is not dealing with just any “girl” out there. He is dealing with me! I got such a great response from the people I spoke to on that day, and the feedback, that I’m definitely planning another “Come To Work On Your Bikini Day” very soon!!! 🙂 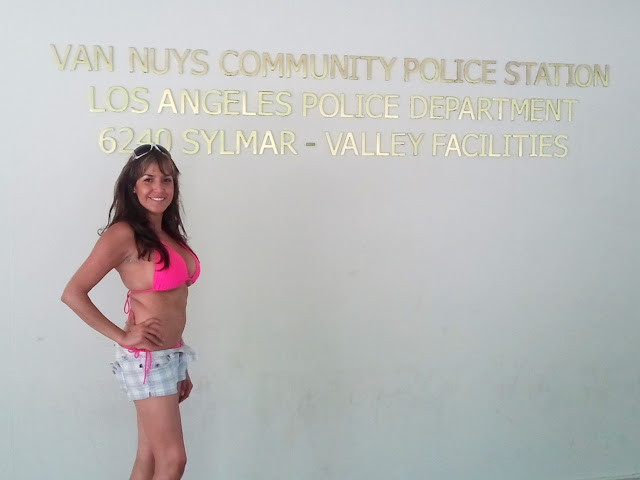