Skip to content
It was around 11:30PM in New York City and I was feeling very tired! After taken a picture in front of a NYPD patrol unit on Broadway, I decided to continue walking towards Times Square. My feet were hurting at this point and so I was thinking about walking back to my room at the Hudson hotel. It was raining a little bit and I was about to turn back, when I told myself: “Come on girl! You’re always telling your kids: ‘suck it up! Stop complaining that you’re tired or thirsty! I don’t want to hear it!’” LOL Yet, here I was about to give up because I was too tired?! Really??? So, I did what I always tell my kids; I sucked it up! LOL!!!  😉 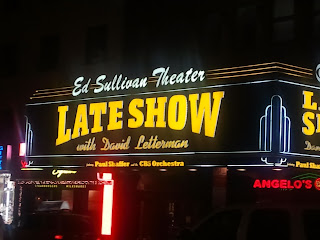 Continuing my tour, I walked by the Ed Sullivan Theater and took another picture. As I continued walking on Broadway; I passed right in front of the Winter Garden Theater where Mama Mia was playing! I was so excited! I haven’t seen the play yet, but the movie was pretty cool!  (I love ABBA! By the way) LOL!!! I was taking in everything around me, all of the very tall buildings, billboards and all of the lights, when all of the sudden the whole atmosphere in the street began to change. 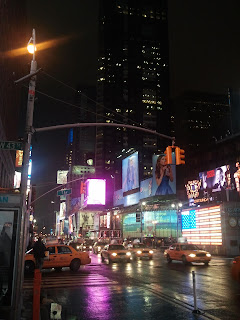 The yellow cabs were going by so fast! And I could hear excessive honking! At the crosswalks, people were running from one side of the street to another because apparently in NYC, the taxis have the right away and not the pedestrians!!! I think the very first time I crossed the street in that area, I ran frantically screaming from one side of the street to the other!!! Hahahahahaha!!!! I’m still cracking up about that!!! Like I’ve said before, where’s a camera crew when you need one?! Lol!! 😀 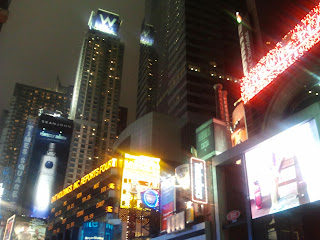 At this point, the billboards were getting bigger and brighter! At a distance, I could see the One Times Square Building, that’s where the Times Square Ball comes down on New Years’ Eve celebration each year! I wasn’t cold anymore I think the heat of the billboards lights were keeping me warm, or maybe it was just my whole excitement of being in Times Square…I don’t know, but it felt great! The crowd in the street was so alive and happy! Even though it was 1AM…Time Square was like a huge party! The music was loud and there were tons of people. Some people were taking pictures, while others were just walking down the street and shopping. Everyone looked so happy! Hell, even the cops looked happy (course that may have been just cuz I was there)! LOL!!! NYC is definitely my kind of town!!! 😀 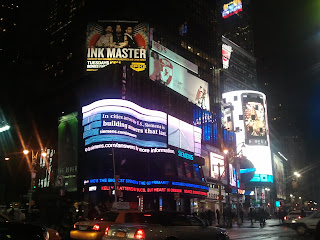 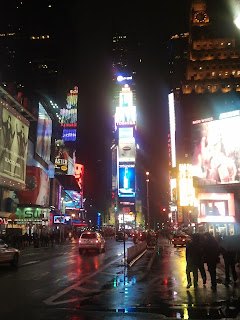 Once I reached the ending point of the intersection of Broadway and 7th Street, I took a moment and stood still right in front of the One Time Square building. I took a few deep breaths and then I felt my tears coming down my face. I put my head down so no one could see that I was crying. I was overcome by so much happiness and such a huge sense of accomplishment! I asked myself, “How did I get here? This is unbelievable!” When my ex-husband Javier accused me of Domestic Violence in 2008, I was alone and scared in a cell at the county jail. Though, I hate to admit it, I literately considered taken my own life when I was told that I was going to be losing custody of my kids. It was such a dark moment in my life! My heart was breaking little by little and the pain I felt at the time was unbearable! But, when I was standing there; in the middle of Times Square, I didn’t feel any pain, no sorrow, no worries, no resentment, and no hate. I was finally happy!  🙂 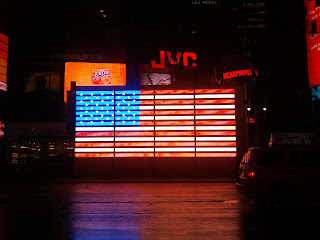 I understood then, that God wanted me to experience every single one of those moments; either moments of despair or moments of joy because He was preparing me for the big picture, for His big plan! I always knew deep inside, that one day I was going to be rewarded for not giving up or losing faith, for fighting for my children and fighting for what its right! I stood up and began to beat the odds! I guess I really needed to find out who I really am and the things that I am capable of doing on my own.  I needed to grow as an individual, to become the best I could be; so, I could finally find my own happiness.
I prayed and thanked God for the amazing life He has giving me! For showing me the light and for assuring me of a great future! Literately, I think my future is so bright right now that I’m going to need sunglasses to see it from this point on! Lol! 😉 And it doesn’t get any brighter than Times Square for God to give me a little taste of what it’s to come in my future! 🙂 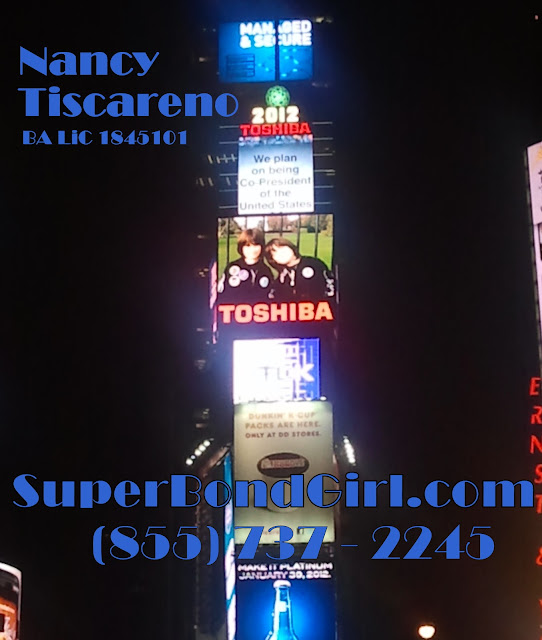