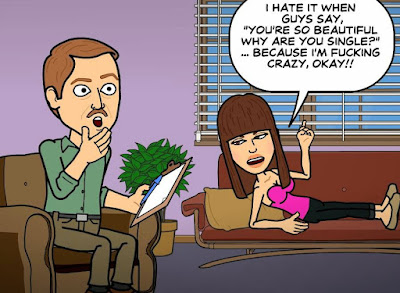 A couple of years ago, I met a dude named Josh. Josh is a salesman, he’s married with kids and overall he’s a really cool guy. I like him and I like his energy too! But, he’s also one of those dudes who thinks that he’s a psychologist (self taught). He’s always ready to start analyzing your behavior, right away! And he loves to give you his input about the reasons why you act the way that you do. I obviously don’t need to go see a psychologist because I know EVERYTHING about myself! LOL!

One day I was having lunch with Josh, and we were brainstorming about ideas to help advance his business (Josh promotes spa & massage salons and hair salons) when all of the sudden, he tells me “I know why you love posing wearing a bikini and all the provocative sexual marketing that you do!” I thought, “Oh, there he goes again with his psychology shit!” Josh continued, “Nancy, you do all this crazy stuff because you’re insecure!” hahahahaha!!!! I told Josh, “I got 99 problems, but insecurity ain’t one”.

This past March, my dear childhood friend Maribel posted the following statement while sharing one of my blog post on her Facebook. She wrote:

“This is my friend Nancy, my neighbor and childhood friend. I always knew that she wasn’t a normal girl. Since she was little, she’s been intrepid, defiant and flirtatious. We played outside and always had a great time with all her ideas. Later on, while we were growing up, I began to notice that wherever she went, she was the center of attention. Perhaps it was her charm or pheromones with a enviable sex appeal. I could keep writing the whole day about her because she’s shared so many of her anecdotes. She’s simply different and special.”

Oh man! After I read Maribel’s post, I was crying like a baby! Maribel and I have known each other since we were 6 years old. She has 2 older sisters and together we got into so many awesome and crazy adventures growing up in our little hometown in Guatemala. Maribel’s Mom was really cool too! She always supported us with all of our shenanigans! LOL! Aww! the memories! <3

Maribel lives in Guatemala with her husband and two sons and the last time I physically saw her was in 2007, when I went back to Guatemala and visited my grandparents. We keep in touch almost everyday through Facebook. And even though we live in different countries, she’s amazingly supportive towards me and I totally adore her!

What most people don’t know is that I’ve always been this way. I’m very comfortable with my sexuality and I love exploring new ventures. Many people have told me about some of the pictures I’ve posted, “Oh my god, Nancy! Think about your kids!” LOL! I always laughed when I hear them say this because what they don’t know is that my kids have been exposed to my sexuality since the day they were born! So, my kids don’t know any difference. (And before you start judging me, let me clarify that my kids are now 20, 17 and 15 years old. So, they’re not “little ones” anymore, but they’re still my babies! LOL!) 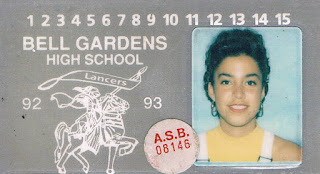 When I attended high school, there were many times when I went to school without wearing a bra. Not wearing a bra was normal to me! Plus, I attended high school during the early 90’s and apparently, nobody gave a shit about the dress code at school at the time because no one ever told me to go home and change! My high school friend Martha reminded me a couple of years ago about a yellow midriff top I used to wear to school. No bra, of course! LOL! Ironically, that’s the same exact yellow shirt on my high school ID! hahahahaha!!! (And, I know! I know! My face hasn’t changed much since I was in high school; but, that’s what happens when you become a vampire!) hahahahaha!!! 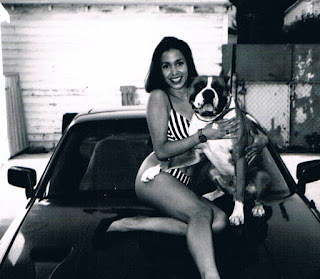 A few months ago, my kids and I were going through some old pictures. My daughter Rio found a few where I was wearing a black and white stripped bikini and she asked me, “Mom, how old were you when you took these pictures?” I replied, “Seventeen, honey” Rio said, “You should post this. So people know that you’ve always been this way!” 😉