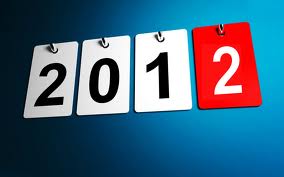 2012 has definitely been a very exciting year for me! I’m going to go as far as to say that 2012 has been and continues to be the “Best Year of my Life!” I had many special opportunities “come and knock at my door” this year; and, I didn’t think twice about not taking a chance. So, I went for all of them! 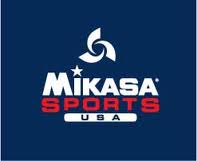 In January I had the opportunity to be on Anderson Cooper’s talk show. And with that experience I have to tell you, that “Dreams do come true!” In February I got contacted by the Inland Empire Magazine (a local publication in Riverside County, CA) to be featured in their May issue; and that was also an awesome and wonderful experience! And in April, I got a text from my friend Wendy asking me if I would be interested in recording a radio commercial in Spanish for Mikasa Sports USA!… And you guessed it, I said “Yes!” (I said yes, even before she mentioned that I was going to be compensated. $$$) LOL!!! 😀

My friend Wendy’s husband Johnny Flaherty, is the Chief Operations Manager for Mikasa Sports here in the United States. Mikasa Corporation is located in Japan and they have been creating and perfecting the most important part of the game: “the ball” since 1917. Their football, basketball, volleyball, soccer ball and handball are often used for official matches, games and competitions. Mikasa volleyballs are the official balls for all Fédération Internationale de Volleyball worldwide competitions. And Mikasa Balls have been the official ball for the Olympics since the 1964 Tokyo Games. Presently clubs, high schools, colleges, and tournaments throughout the U.S. use Mikasa volleyballs. Mikasa socccer balls are FIFA approved and there are also IMS(International Match Standard) and NFHS approved.  Please check out Mikasa Sports website:  www.mikasasports.com 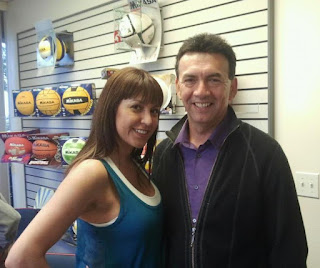 For this soccer commercial, Mikasa Sports hired radio personality, sports announcer and soccer commentator: Samuel Jacobo (W radio 690AM-“La voz del pueblo”). The commercial had been scheduled for recording at Mikasa Sports headquarters in Irvine, CA. on April 6th.
My friend Wendy drove me around on that day. Aww! She’s already treating me like a celebrity! LOL!!! (I love you girl!) Wendy figured if Mr. Jacobo was going to show up with his posse, then I was going to show up with my posse too! Hahahahaha!!!!… We arrived at Mikasa Sports headquarters and I got introduced to Mr. Jacobo and his personal assistant, the top salesman for Mikasa Sports, the marketing director, the sound engineer, and a representative from Mikasa Sports who had flown from Japan to foresee the recording of this commercial.
It was really awesome to meet Mr. Jacobo in person, not to mention that it’s an honor for me, knowing that my voice is featured on the same commercial with such a radio legend! 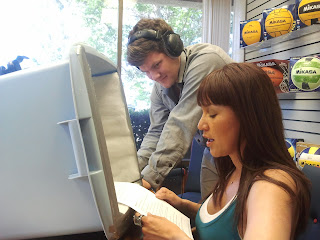 On the conference room table, I noticed a very strange looking recording device. The sound engineer proceeded to tell Mr. Jacobo and me, that we were going to speak our lines into the microphone one by one.

Mr. Jacobo was the first one to record his lines. He was so good at it! He was very smooth and he was done recording his lines in no time! I was beginning to get a little nervous, wondering if I could do the same thing! 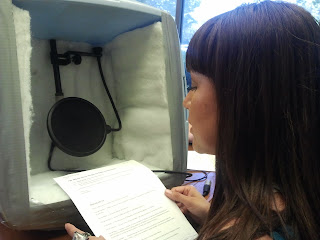 Once Mr. Jacobo was done, it was my turn to speak my lines into the weird looking plastic box. And it’s a good thing that I’m not shy because all the men in the conference room were staring at me, anticipating my performance! LOL!!! 😛 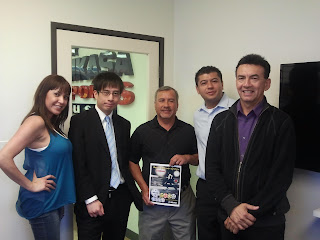 I began to speak my lines onto the microphone; but at first, I wasn’t happy with my recordings. Man! I have to tell you, acting with my voice was a lot harder than what I thought! I was given several tries, until I was really happy with the sound of my voice and the emotions. Mr. Jacobo made it look so easy! But, I’m very competitive; so, I decided to step it up a notch and concentrate on doing a good job! I think the whole recording from beginning to end lasted about 45 minutes and I had a blast! I’m not a professional broadcaster, (although, I could be a good radio personality since I never shut up!). Lol! But after this experience; I think I’ll be adding “broadcasting” to my “Bucket List” because I really enjoyed it!
Like I said in the beginning of this blog, 2012 it’s definitely the Best Year of my Life! In 2012 I was on national TV, I made it in print and I was also featured in radio! Wow!!! I’m so blessed! 😀 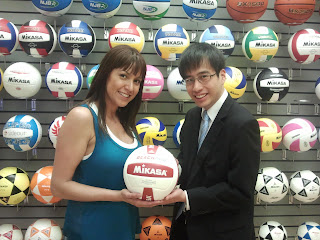 Never listen to the negative people in your life! In fact, get away from them! You don’t need them and you know it! My ex-husband used to tell me that I was “a stupid Guatemalan“. He was always so negative and putting me down. Yet, look at all the things I’ve been able to accomplish without having his “draining negativity” around me! I feel so awesome every single time I accomplish one of my goals or one of my dreams. I’m really happy! 😀

I would like to thank Mikasa Sports USA and Johnny Flaherty for considering me for their commercial. Please don’t forget to check out Mikasa Sports website at: www.mikasasports.com 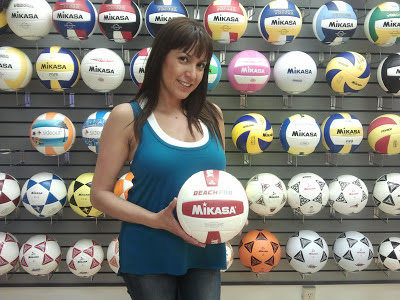